What Is Telepresence and How Can 6G Improve It? 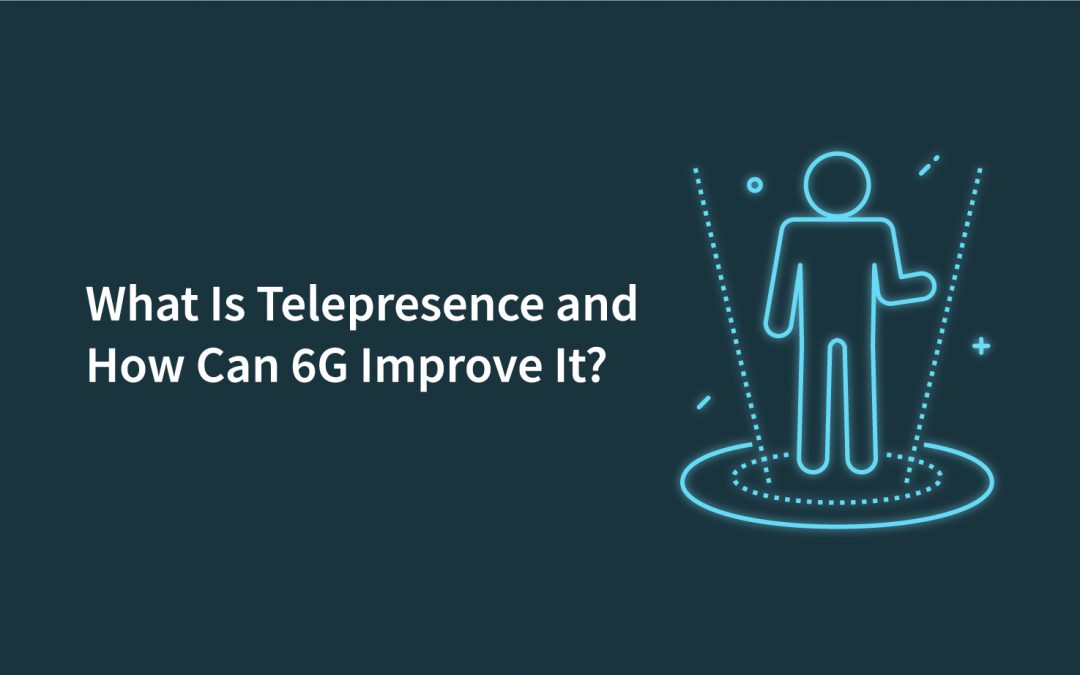 We’ve heard of telecommuting and telephony, but what is telepresence? It’s a term that’s cropping up in discussions on the potential applications of 6G, and we’re going to explore it right here.

6G is largely regarded to drive the most significant transformation in technology and infrastructure that we’ve ever seen. Due to the high level of new infrastructure necessary to fully implement it, we can reasonably expect the technology to touch every aspect of our world.

One of those aspects will be encapsulated by telepresence, which has the potential to affect our relationships from work to our social circles, to our family. Read on to get acquainted with the concept of telepresence and learn how 6G might affect it in the future.

Telepresence is a type of technology that allows a person to meet another person virtually, but with the sensory stimuli to make it feel as if the other person was physically present in a space. Typically, telepresence relies on hand-held mobile devices, headphones, and occasionally even computer screens.

In a nutshell, imagine the holograms in Star Wars, but way more convincing for those actually at the Jedi Council. Or using VR to control a robot that’s physically present in an environment.

It’s part of a category of technology that uses something called enhanced mobile broadband (eMBB), one of the three use cases for which 5G was specifically designed. Applications that require eMBB are resource intense, needing the high data transfer capacities and low latency that 5G offers.

Telepresence robots have existed for at least five years, although they haven’t experienced significant popularity. Many of them exhibit the same limitations as other technology that needs 5G to operate. They’re often restrictive, unwieldy, and prone to lag.

How Does It Differ From Other Forms of Video Conferencing?

However, telepresence differs from video conferencing through the use of extended reality. To be truly defined as telepresence, you must be experiencing sensory stimuli that trick your brain into perceiving the actual presence of the other person – or of your presence in an environment.

With the rollout of 5G and the potentials of the Internet of Things, telepresence is poised to become a major technology that affects the way we work, socialize, and have relationships. However, we expect that it won’t be until 6G that telepresence truly shines.

How Does It Differ From Teleoperation?

Where Is Telepresence Frequently Used?

Telepresence has several applications, particularly in high-stakes environments. Among the many actual and proposed areas of use include:

What Telepresence Will Gain With 6G

Telepresence is a potentially powerful technology that needs a wireless network capable of delivering zero latency and massive data transfer capacities. We can expect a maturation of telepresence with the rollout of 6G sometime in the 2030s. It will bring:

We expect it will be 6G, not 5G, that finally makes it possible to craft a fully multi-sensory extended reality experience. Telepresence will directly benefit from this by being able to create these experiences from the machine learning capabilities that become possible.

Although proponents of 5G tout it as being 1,000 times faster than 4G, some early research suggests those numbers are overinflated. 5G will be fast, but it appears to suffer from the same speed limitations as 4G. Notably, when spectrum lanes are super populated, the overall speed slows down, affecting network reliability.

That won’t happen with 6G, meaning that telepresence applications in high-stakes environments that need perfect reliability will finally be practical.

6G is largely expected to harness machine learning and artificial intelligence to create intelligent networks. What that will really mean is more democratic access to smart resources, including the ability of devices to draw inferences from local data. Telepresence will be able to take advantage of this, drawing from local devices to create a more lifelike experience.

Current telepresence devices – as well as emerging 5G resources – are quite expensive. In contrast, some visionaries expect 6G to deliver cheaper and more energy-efficient devices. If it does, that will make telepresence technology much more accessible to everyone.

6G Will Redefine What It Means to Go Remote

Telepresence has already made some inroads into many industries, but it needs the power of 6G to truly shine. With smart networks, ultra-reliability, and zero latency, we can expect this technology to become mainstream in the 2030s when 6G finally rolls out.

In the meantime, telepresence, like other technologies that harness virtual reality, will remain a novelty that is interesting, sometimes humorous, and far less practical than it could be.

Want to know the latest 6G developments and trends? Sign up for our newsletter today.