The Launch of 6G: When Will 6G Be Released? 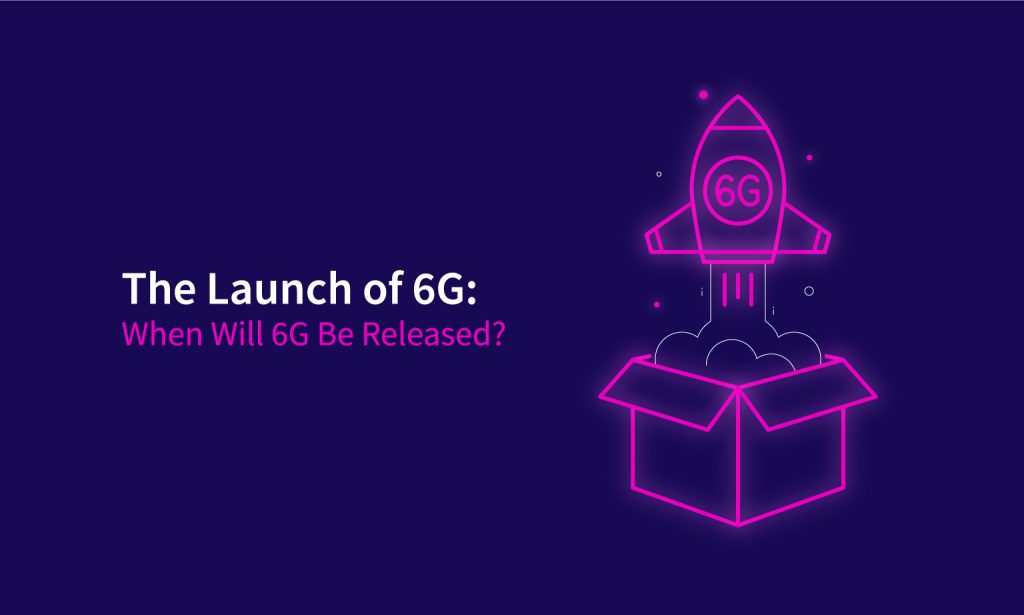 6G managed to make headlines in late 2019 when China announced that it was poised to launch 6G research, just a month after rolling out 5G in the country.

That kicked off a seeming arms race as other companies jumped on the bandwagon. Suddenly, 6G was everywhere – never mind that 5G wasn’t yet really established in the world.

However, the internet quickly seized the sensational headlines, and, overnight, speculation sprung up that 6G might come out sooner than a decade from now. Perhaps it was already here, used by some secret upper echelons of the military. Perhaps 6G is just an elaborate hoax.

6G is very real, and it is coming, but its release date isn’t any time soon. Read on to learn more about why wireless generations take a decade to develop, why the fact that 6G research has already started isn’t that crazy, and why we won’t see 6G before 2030.

The Pace of Wireless Generations

Wireless generations seem to hit the stage about once every ten years. We don’t think 6G will be any different.

Every wireless generation up until now has built out or refined the capabilities of previous generations, usually addressing specific limitations uncovered immediately or soon after release. That’s part of why research into the next generation tends to start so quickly.

For example, 2G introduced some early texting capabilities, but 3G made them standard. 4G took things a step further by making multimedia messages much easier to send and receive.

However, most of the limitations identified in each generation have related either to technology (hardware), or infrastructure. When the limitation is the hardware, it’s relatively easy to advance. That’s why we’ve been able to go from basic texting to streaming HD videos. In contrast, infrastructure limitations are much harder to overcome. That’s why the IoT isn’t a thing (even though we have the technology for it), and probably won’t be for a while.

There are definitely some people out there who think it’s crazy to start researching 6G now. One look at some of the tech hubs full of people scoffing at the notion confirms it.

However, ever since 1G hit the scene in Japan in 1979, sparking the era of cellphones, telecommunications researchers have been slightly obsessed with finding “the next big thing.” Almost without fail, research on the next generation of wireless connectivity has started immediately following (if not slightly before) the release of the current one.

For example, 4G became widely available in 2009, but NASA had already begun to experiment with 5G for its nanosatellites a year earlier. And research into 5G actually started way back in 2012 in some parts of the world.

We could trace the trend back further if we want. 2G research started at the same time as 1G’s rollout because the technology was fraught with security problems, poor voice connections, handoff difficulties, and more.

With this context, China’s announcement isn’t that spectacular. Here are four other countries also working on 6G. The next time you see someone loudly mocking 6G research on the internet, enjoy the show. They’re not as informed as they think.

If you’re still not convinced that 6G lies at least a decade in the future, look over these five reasons why we think it won’t and decide for yourself.

1. We’re Not Really Sure What Technology We’re Lacking

One of the reasons that predicting 6G technology is so hard is that we don’t really know what sort of technology we lack to achieve 6G as we envision it. As it stands, 5G represents the frontier of wireless technology that currently exists. We have an idea of what 6G will be about, but we haven’t yet figured out what we need to get there.

People are definitely working on it, however – especially in Finland.

2. We Definitely Don’t Have the Technology We Need

If the seminal papers on things like edge machine learning in 6G wireless networks are any indication, we severely lack both the infrastructure and technology we need to see 6G become a reality. Speaking of infrastructure.

3. The Law of Accelerating Returns Doesn’t Apply to Infrastructure

Technological advancement has indeed accelerated, largely because the law of accelerating returns applies beautifully to technology and innovation. In contrast, infrastructure is subject to linear change, which is why it gets more expensive to maintain and upgrade the older it is.

4. 5G Is Still Struggling to Roll Out

5G is running into difficulties, not the least of which includes the major (and expensive) infrastructure upgrades needed to roll it out in places like the U.S. Across the pond, European telecommunications providers are dealing with conspiracy theories resulting in the vandalism (and sometimes complete destruction) of 5G towers.

5. Even the Major Providers Say So

Although China announced that it had begun 6G research, it also admits that the technology won’t be available until at least 2030. Other leaders, like Samsung and LG, have made similar statements.

6G Is Coming … But Not for a While

The very public announcements around the launch of 6G research were met with surprise and perhaps a bit of laughter. However, we’ve shown that it’s not at all unusual for research into the next generation of wireless connectivity to follow this pattern.

Generations take a decade or more because of the infrastructure challenges surrounding the implementation of more sophisticated technology. This is only going to remain true as we begin to rethink the fundamentals of wireless connectivity, such as the way we organize our networks. If anything, 6G will see the most significant infrastructure update of any wireless network generation. That means 2030 might even be an optimistic release date for 6G.

Wondering what the latest is on 6G research and development? We’re on it. Sign up for our newsletter today to stay up-to-date with the latest developments and trends.