The Rise of 6G Short-Range Mobile Communication Networks: What It Is and Why It Matters 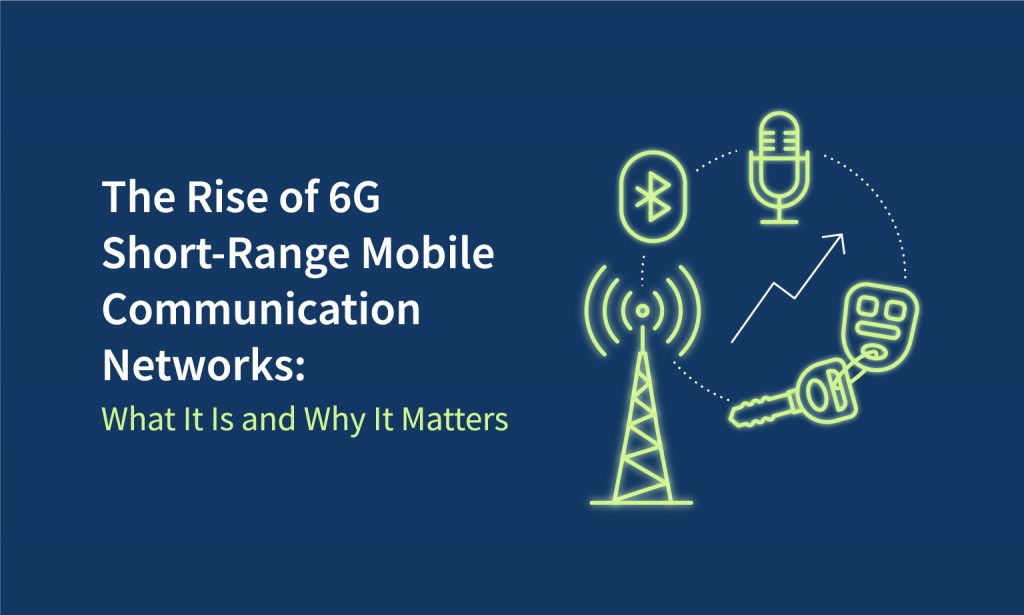 Our mobile communications networks cobweb the world, bringing connectivity to more people than ever before. Yet, as we forge ahead to more sophisticated technology, we’re quickly discovering inefficiencies that threaten to throttle that advancement. That’s prompted some experts to rethink the role of a short-range mobile communication network as we imagine what 6G might one day do.

What Is a Short-Range Device?

As we’ve mentioned before, all telecommunications transmissions are organized by category and assigned different frequencies. We call this collectively the spectrum.

A short-range radio frequency is a particular frequency upon which signals can be sent and received that are unlikely to interfere with nearby devices, also transmitting signals. Devices that use short-range frequencies are known as short-range devices.

We’re used to thinking of wireless technology and our mobile communications network as having a global reach. While that’s true, short-range devices are extremely common in our daily lives. They constitute the bulk of wireless devices we use every day. Some examples include:

These devices are low-power transmitters that typically have a physical range within which they’re capable of sending or receiving signals. That range may be just a few inches, such as your car’s remote keyless entry or several yards, such as your garage door opener.

With the rise of wireless devices, the FCC assigned specific frequencies to these devices to prevent them from cluttering the frequencies that mobile phones or similar devices use. That’s why the radio in your car doesn’t momentarily scramble when you open or close your garage door – unlike how it might if you happen to be using your phone at the moment, too.

Short-range devices are quite useful in our daily lives. They have several advantages. Most saliently, they:

However, short-range devices do have a few notable drawbacks. They experience:

It might seem surprising, but short-range mobile communication is a significant focus of 6G. That’s because it’s highly likely we’re going to move away from the centralized network model we currently use and adopt a distributed model, much like how our short-range devices are currently organized.

There’s a growing awareness that our current mobile network configuration is, at best, exorbitantly expensive in terms of energy and other resources. Servers running machine learning require massive computing power and, with it, electricity. Likewise, they have traditionally needed access to the entire dataset – that’s spurred a race towards bigger and bigger cloud storage offerings.

5G was meant to accommodate these needs by leveraging terahertz frequencies on the spectrum. However, once we did, we rapidly discovered a new problem: at these super-powered levels, signals break down rapidly over distances.

Just like they do with the very low-powered transmissions of short-range devices.

That’s why the biggest impediment to 5G rollout has been infrastructure. To enjoy widespread 5G, we need many more transmission hubs everywhere (in comparison to the relatively sparse 4G towers wearing palm tree disguises) to collect the signals before they break down.

The Eindhoven University of Technology is reportedly working on a new type of antennae technology that will solve this problem – but what if there was another solution entirely? One that not only reflected the nature of a short-range device network but also harnessed its advantages?

The Rise of Nano-Communication in 6G?

Many of 6G’s imagined uses occur on the hyper-local level. For example, autonomous vehicles and biometric monitors may only need their signals to travel a few feet (or less). In such cases, a centralized network model that sends data to a distant hub is not just unnecessary but introduces latency that could otherwise be avoided.

However, a distributed network of high-capacity, short-range nanodevices could be the answer. Some research currently refers to this hypothetical network as “whisper radio.” With these applications, very high bandwidth frequencies are transmitted just a few feet, and nearby hubs capture the inferences rather than the raw data itself.

Most of the papers from the IEEE currently note that the whisper radio network has significant challenges in terms of security, hardware, and possibly human health. Nonetheless, it’s a move that remains congruent with the broader trend of moving away from a centralized communications network and towards a distributed model.

One of the biggest obstacles to the launch of 5G has been the fact that signals break down rapidly at greater distances. Although some research has begun to develop the hardware to prevent this, other research has suggested that perhaps this is not an obstacle at all.

Rather, a shorter signal range is a feature shared by both high-powered and low-powered transmitters. Perhaps it’s a sign of what mobile communication networks must embrace.

We’re watching the research and development of 6G technology. Join our newsletter now to stay informed.