What is Massive MIMO Technology? How It Impacts 5G and 6G 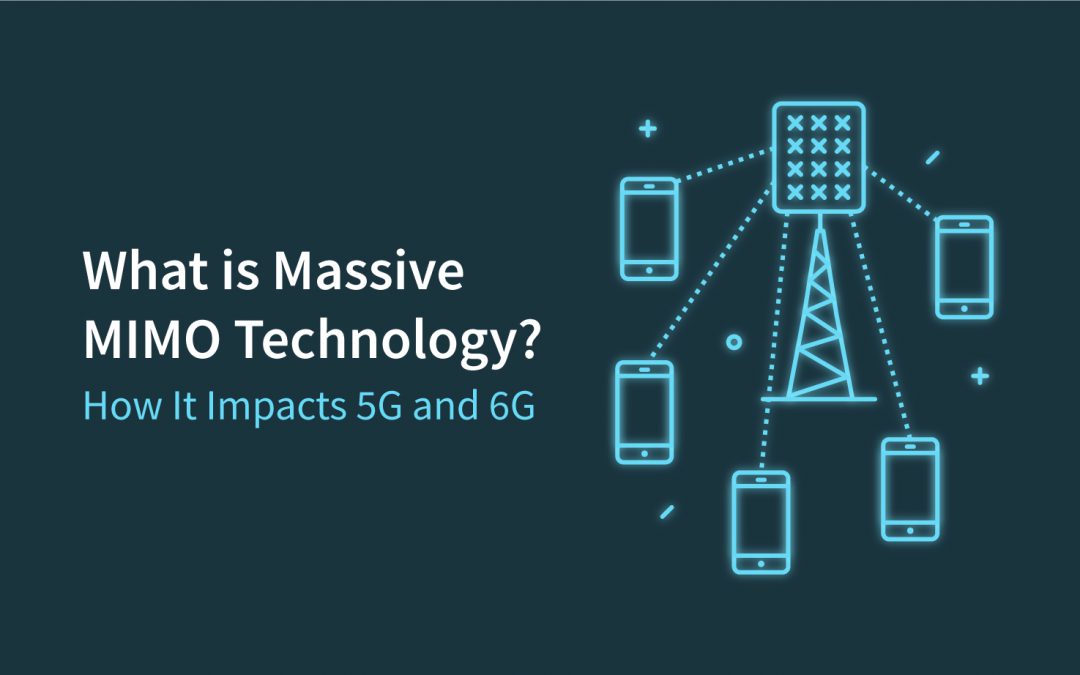 As discussions around 5G and 6G ramp up, we’re starting to see a lot of terms flung around and that might be a little confusing to the average reader. Understanding what they mean is critical if we want to follow the trajectory of 6G research and development. So, we’re taking a moment to dive into one of the more important and popular buzzwords currently afloat: massive MIMO technology.

Here’s a closer look at what it is, how it enables 5G, and what it might look like in the future with 6G.

What is Massive MIMO Technology?

MIMO stands for multiple-input, multiple-output. It’s a technology designed specifically for wireless communications that uses multiple antennas at both the source and the destination. This greatly cuts down on the chance that a signal will deteriorate or be lost due to environmental factors such as physical obstacles or interference that may scatter waves and cause them to take multiple paths to reach a destination.

Massive MIMO is an extension of MIMO that uses significantly more antennas at both transmission and reception points to capture scattered waves. This improves transfer capacity (called throughput), allowing more data to move from point A to point B with greater efficiency.

To illustrate the concept further, if SISO (single-input, single-output, or one antenna at each end) is like listening with one ear, you may not catch everything that is heard if it’s windy or someone is shouting through a wall. If there are two people shouting in unison and two ears listening (MIMO), then it becomes easier to get a message through the wind and there’s a greater chance you’ll hear it.

If you have 50 people shouting and 50 ears listening, the signal is not just loud and clear – it will get heard. However, something interesting happens with 50 antennas on either side: it becomes much less laborious to shout through the wall overall. Each antenna doesn’t need to transmit at its full capacity, and not all antennas need to hear the message for it to be captured.

Fifty people talking at a regular voice level are still loud. Even if only 20 ears hear the message, it still gets through. Plus, the network still has 30 ears to hear other messages, or perhaps the other side has 30 mouths to send messages.

Of course, as the example shows, MIMO and MMIMO do have their limitations. At 50 messages sent to 50 ears, you’re back to square one. When that happens, data speeds slow, some transmissions may get dropped, and errors occur. Kind of like when you’re trying to send a text in a densely populated area.

How It Makes 5G Possible

Massive MIMO is one of the key technologies that make 5G possible, and it’s expected to play a role in 6G as well. However, to make that possible, massive MIMO needs to leverage another trick: 3D beamforming.

The massive number of antennas clustered allows for the creation of 3D beams of data that dramatically improve data rates and data capacity for every user connected to the network. Since the beams have both width and height, the network can locate a connected device no matter where it is in the beam. And since the beam is three dimensional, it allows a narrow, direct connection from the device to the network – in contrast to scattered wavelengths.

Put together? These two things allow massive MIMO to enable 5G. Users get to experience:

With all of these advantages, it’s no surprise that some early researchers are looking at massive MIMO as an enabler for 6G as well. But will that work? Maybe.

Shortcomings and Limitations of Massive MIMO That 6G Must Overcome

Massive MIMO has a long way to go before it runs out of steam, but that doesn’t mean that shortcomings haven’t already been spotted. NYU Wireless identifies a major one:

These two methods of separating signals aren’t compatible with one another and require different hardware to use. Unfortunately, according to NYU Wireless, FDD is much harder to scale to the capacities needed for 6G. To do so, telecommunications providers would need to do one of two things:

This challenge is causing some researchers to look beyond massive MIMO to other paradigms for signal transmission. Others, however, believe it’s a viable technology but will require some adjustments to meet the needs of 6G. Nonetheless, it’s a technology to watch as research and development into 6G continues.

Massive MIMO is considered a key technology enabling 4G and 5G networks. Thanks to this innovation, we enjoy more stable connections, faster data speeds, and an overall enhanced user experience. There are very good reasons for researchers to take a long look at it for 6G networks as well, but the limitations of our current infrastructure may make its widespread adoption for 6G difficult.

Like our phones, networks, and other digital technologies, we expect that 6G will lead to an evolution of MIMO technologies. That will make our networks faster, more comprehensive, and more efficient overall.

The future has never been more fascinating. Join our newsletter and stay informed about what else 6G might bring.