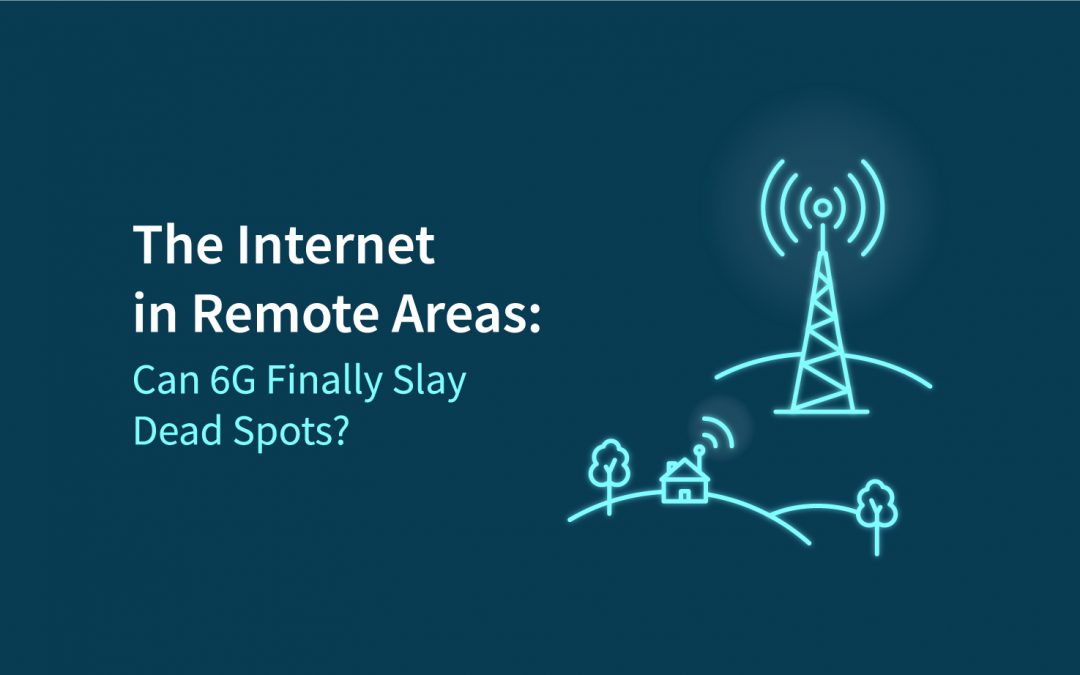 Everyone agrees that connecting the unconnected is a Good Thing – especially when the Internet can deliver such salient economic benefits. Nonetheless, the internet in remote areas remains painfully slow, sometimes exhibiting speeds not seen since the reign of dialup.

With the advent of 5G, that hasn’t shown many signs of changing. That means millions of people living in rural areas around the world lack access to high-speed internet – if not internet at all.

That’s a problem, both from social and economic standpoints. Read on to learn about the state of rural internet in 2020, and how 6G may one day solve the problem for good.

Why Rural Internet Is Still Slow in 2020

It’s no secret that internet infrastructure is a mess, and nowhere is that more visible than its struggle to provide coverage to the rural parts of the world. In 2010, it was estimated that as many as half of all rural areas in the US still lacked an internet connection.

With the mainstream introduction of broadband, that number has steadily dropped. Still, rural internet has remained some of the slowest and most expensive service available. As a result, the FCC estimates in 2020 that some 14.5 million Americans living in rural areas still lack internet access.

Why? A few reasons exist:

However, as the world becomes more and more digital, reliable access to the internet isn’t just an advantage, but a necessity. Countries without reliable internet access will find it increasingly difficult to compete in the global economy. Within the US, a lack of internet access cuts rural Americans off from the burgeoning digital economy.

At the end of 2019, the FCC unveiled a $9 billion 5G Fund meant to finally bring internet to the rural US. However, most experts point out that it likely won’t be enough to compel major carriers to finally invest in rural areas. After all, a lack of revenue incentive still exists.

But could the story be different when we finally roll out 6G? We think so. Here’s why.

How Will 6G Deliver Comprehensive Coverage?

Most telecommunications experts believe that wireless internet is the only option for remote or rural areas. Wireless internet sidesteps many of the problems currently preventing expansion, notably the expensive fiber optic cable bundles that would need to e installed.

With rural internet estimated to still be a decade or more in the future, that’s where 6G might finally step in to fill the gap.

We’ve noted that one of the defining features of 6G will be comprehensive coverage – that is, massive connectivity on land, under the sea, and even in space. This feature was advanced first in NTT DoCoMo’s whitepaper on the capabilities of 6G.

NTT DoCoMo’s whitepaper is preciously sparse on details about how to accomplish this. However, it does suggest the use of a variety of satellites including geostationary, low-orbit, and high-altitude pseudo-satellites to distribute coverage. Through the creation of new network topologies (or arrangement of network elements) that leverage a distributed model, extreme coverage with 6G should be possible.

It is also likely how we will finally come to deliver reliable internet to rural areas.

Satellite internet is already the primary vehicle for delivering the internet in rural areas. Some researchers have looked into its role in creating extreme coverage and connectivity with 6G.

For 6G in particular, this solution is particularly promising because recent technology advances have made it easier for satellites to handle more data and more connections more cheaply and easily.

Additionally, unlike other forms of connectivity, satellites have a few distinct advantages. They:

Of course, all of this begs a serious question. Will rural internet really have 6G – including terahertz speeds?

Yes and no. As some people have pointed out with rural 5G internet, it will indeed be 5G technology that delivers coverage. However, it will be slower, at a lower frequency that is capable of traveling distances without breaking down.

6G rural internet likewise won’t be as fast as urban 6G. However, it will experience the same low latency, reliability, and comprehensive coverage as the rest of the network. (It will also be much faster than what currently exists.)

6G Will Mean Internet in Remote Areas – And Other Great News

If 5G doesn’t manage to establish the internet in remote areas, then 6G almost certainly will. Unlike AI-powered networks, we’re already arriving at the technology necessary to sidestep the major obstacles preventing internet development in rural areas.

The days of dead spots and spotty connectivity are numbered. We may not even need 6G to accomplish it.

6G is going to change our world for the better. We’re exploring the variety of ways in which it might. Sign up for our newsletter and stay connected.

Filed Under: Blog
Tagged With: wireless internet in remote areas