5G Has Issues: Here’s How 6G Will Fix Them 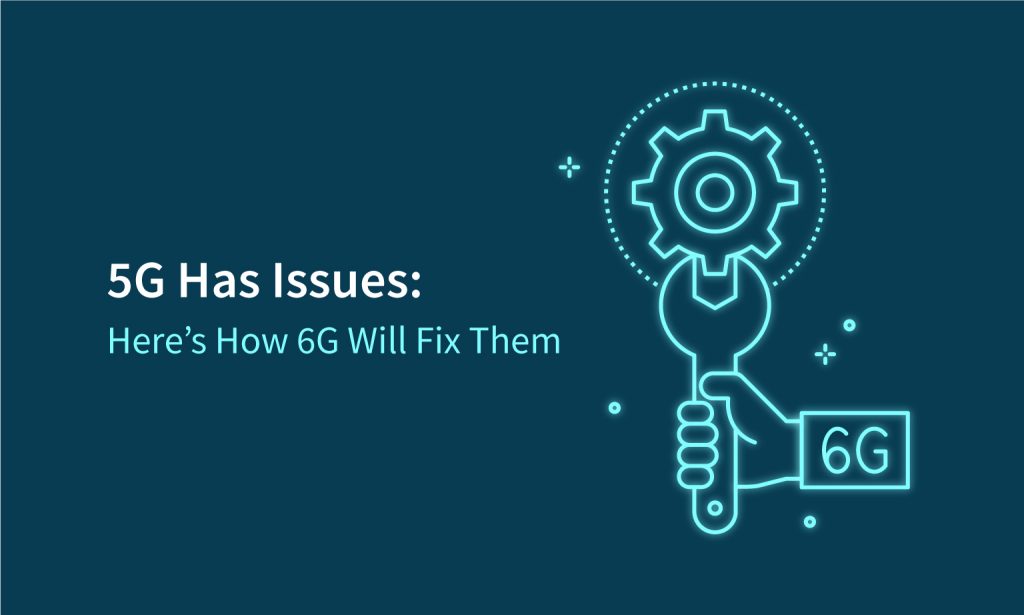 5G may have hit the scene in late 2019, but its implementation remains slow. Issues plague its rollout across the board from hardware insufficiencies to privacy concerns. Some experts believe that the widescale adoption of 5G lies years in the future, which has implications for the release of 6G in the 2030s. We’re taking a closer look at the issues that 5G has, and how 6G will solve them. Let’s dive right in.

What Issues Have Surfaced with 5G?

5G has issues. As it rolls out in various parts of the world, those issues are quickly bubbling to the surface and threatening to impede the widespread adoption of the next generation of connectivity. The vast majority of those issues surround three components of 5G: infrastructure, data security, and transmission ranges. Here’s a closer look at each.

Perhaps the biggest barrier to widescale 5G rollout lies in its infrastructure and hardware requirements. In short, 5G needs a lot of hardware to support it and, unfortunately, that’s expensive. McKinsey predicted that network-related costs would need to increase by 60 percent to upgrade current 4G network infrastructure to handle the next generation of wireless connectivity.

We aren’t just talking about upgrading towers and antennas either, which McKinsey refers to as “legacy network evolution.” We need many, many more. As of 2019, Ericsson boasted some 350,000 cell towers across the US – they estimate the number needs to grow to one million to handle the demand for 5G over the next four years.

Even if we figure all that out, we’ve got another major technology hurdle ahead of us: Most smartphones can’t handle 5G. Currently, only a handful of the latest models are capable of supporting it. That suggests we’re facing a need to rethink smartphone technology, the same way we’re currently thinking about how to redesign our wireless networks to handle it.

Speaking of those ubiquitous consumer devices, 5G has some major data privacy concerns. In theory, 5G is more secure than 4G because it’s much more difficult for criminals to spoof user identities, pretending to be someone they’re not (that’s how a lot of phishing occurs).

However, if you look carefully at that explanation, you might notice something. It’s a nice way of saying that the nearest cell tower knows exactly who you are. All the time.

When we consider that 5G has a much smaller footprint (because those high-frequency signals break down faster), what we’re really looking at is the reality that our devices can track us to a level of detail unknown in earlier wireless generations.

Likewise, some experts warn that the Internet of Things opens the door for increased threats to our data and privacy. By empowering the average consumer with ever-helpful smart devices, there’s an increased chance that devices may have settings misconfigured or even missing as products are pushed to the market (HP once found that 70 percent of IoT devices had security vulnerabilities).

5G might be ten times faster than 4G, but it travels less than a tenth of the distance. Whereas 4G has a range of approximately 10 miles, 5G signals can travel about 1,000 feet if not less.

According to McKinsey, the current solution relies on a combination of small cell solutions for dense urban areas and increasing backhaul fiber transmissions. In both cases, this requires a substantial buildout of network infrastructure, and there’s no guarantee that 6G will be able to use any of it.

How 6G Will Address the Shortcomings of 6G

Those developing 6G have their work cut out for them. Fortunately, many of the shortcomings of 5G have already surfaced in 6G research. Of particular interest is the way we’ll lay out our networks, and how we’ll approach security.

One of the biggest areas of research and development for 6G lies in how we’ll lay out our networks to handle the tremendous data movements, ultra-fast speeds, and the presence of sophisticated artificial intelligence. We’ve talked a little bit about the role of machine learning in 6G networks, especially its ability to intelligently reallocate resources as necessary.

However, many experts believe it’s necessary to move away from centralized network configurations towards something a little more dynamic. Not only will this help networks save energy (moving lots of data really fast is resource intense), but it will also allow networks to take advantage of a neat concept known as mobile edge computing (MEC).

In MEC, network providers run applications and services on the network’s edge – that is, in close proximity to consumer devices and end-users – rather than from a central server to and from which data must travel. This configuration improves data speeds and lowers latency.

It also allows devices to keep their data stored, rather than sending it off across the network. That means we’ll also have a chance to rethink device security in 6G.

Device-level or hardware-level security is a philosophy of cybersecurity that advocates securing hardware from being tampered with or data from manipulation by placing security features on the hardware itself. It’s a focus of 6G research, as it’s expected that the sheer amount of devices and their sophistication will make software patching untenable. Likewise, because 6G networks are widely expected to have AI embedded in them, security will be improved thanks to the use of predictive analytics on the hardware level.

Without a doubt, 5G has many issues and obstacles to surmount before it’s ready for the world. We’ve taken a closer look at some of the biggest problems that have been discovered thus far. From the inability of phones to handle 5G networks to the serious questions around privacy and data security, its rollout will remain hampered until these problems are solved. What will that mean for 6G? Hopefully, a new outlook altogether on wireless connectivity.

6G will be more than an extension of 5G. We’re tracking the possibilities. Subscribe to our newsletter now and keep informed.